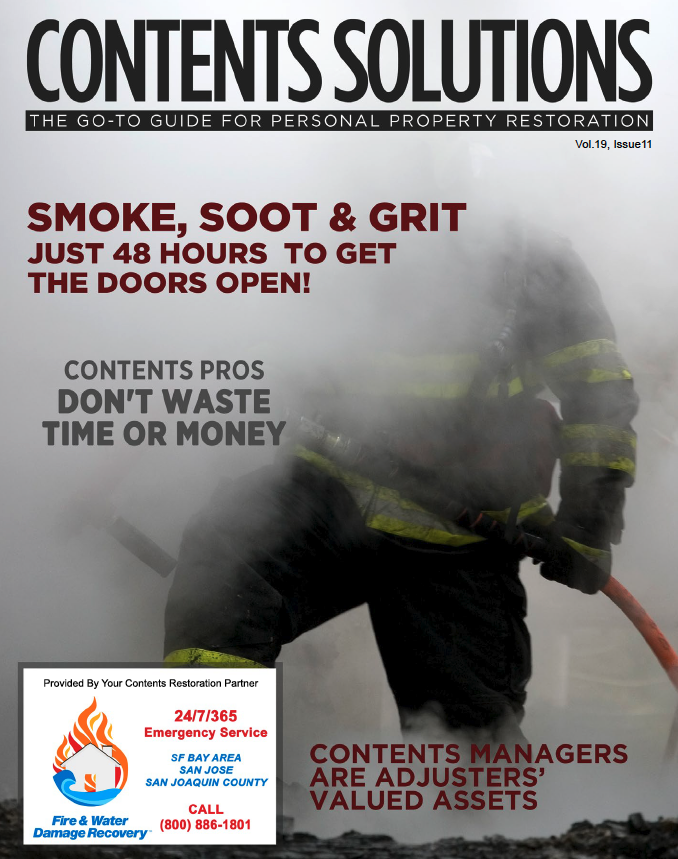 Every contents team has seen something like it. A fire swept through a large grocery store (part of a chain of 1,200 stores – you probably know which one). Soot was everywhere (even on the 26 ft. ceilings, the walls, the groceries themselves and the floor). There was even dark grime that had worked its way under the plastic wrap of sealed water bottles. And, this all happened on the weekend before what the store’s management considered to be biggest sales day of the year – the 4th of July!

The fire department had extinguished the fire before it set off the sprinkler system, but the resulting smoke had coated everything – perishables and non-perishables alike.

The health department wanted the team to dispose of the fresh produce and the refrigerated meats, but everything else was subject to possible restoration.

The contents pros knew what had to be done, but the store’s management had protocols of their own, and they wanted to be open and selling in just 48 hours. Plus they were very concerned about their reputation and possible loss of revenue, so the entire team “dressed down” and arrived in unassuming vehicles.

The contents manager worked closely with the store administrators. Her 10 person team labored around the clock. The smoke odors had to be removed before customers arrived, so she called in 40 hydroxyl generators directly from the manufacturer.

The machines arrived and were put in place just 6 hours after she called! An amazing feat! She added in her own air movers and had a special electrical box created to handle 80 pieces of equipment.

A five person team cleaned out the attached warehouse, and both groups used scissor lifts and extension poles to clean and restore everything from the ceiling down. The initial cleaning and restoration was completed in a record breaking 14 hours.

24 hours after the hydroxyl machines were plugged in, the smoke odors were gone. The onsite managers were ecstatic and felt like the contents crew might just pull this off.

The project manager knew she had superior techniques for this sort of challenge, but the store’s management had other ideas, so remaining sensitive to the store administrator’s needs she stationed her people where they could assist the store’s employees. This strategy kept the whole project moving forward.

In the end, the store opened with time to spare, the contents pros were quietly proud of their extraordinary accomplishments and the grocery store division director of operations was deeply grateful.

In fact, an authority attached to the project was so enthusiastic that he sang their praises, and another large loss was offered to them a week later. The contents pros were on the job again.

Sometimes an owner will make it plain that he (she) wants everything cleaned on site for various reasons (often personal). Other times the homeowner or business owner will insist that as many articles as possible should be taken to the contents pros’ cleaning facility, so the latest technology can be used with the valued items.

And sometimes, there is no choice. Even the contents specialists can’t restore a big screen TV onsite that has been penetrated by soot and doused with fire hoses. They need special deionized water and special spray devices to clean out all the contaminants.

The contents manager has different ways of dealing with the customer in each circumstance and more than one adjuster has been glad to have them handling that part of the job. Part of every assignment is helping the insureds get through the difficulties that come with each and every catastrophe. The contents managers are often found to be the adjuster’s most valued asset because they not only save money, but they reduce stressful moments so the adjusters don’t have to.

Quite a number of adjusters have started to notice that there are less angry or disappointed homeowners when the contents pros are on the job. Contents managers know why, but adjusters have been asking, “What is the difference that creates such results?”

Contents project managers know that emotions are running high on any disaster restoration project. Homeowners get angry or deeply disturbed for lots of reasons, so we take extra time training our frontline workers to anticipate such responses. And even showing them how to build a relationship with the client before anything even happens.

From the first moment the team arrives, we start by asking permission, “Is it okay to park there?” “May we put a second shoe-cleaning mat in the foyer? Our team uses these new sticky mats to make sure we don’t track anything into your beautiful home.”

And we keep on asking permission all throughout the job, “We would like to work on restoring your master bedroom today. Is that all right?”

This gives the owner a chance to feel in charge of things (we have seen structural teams say, in an authoritative tone, “Move back please,” when moving a heavy piece of furniture across a living room floor).

Doesn’t sound all that terrible does it? But to a frazzled homeowner it might sound as if he (she) has done something wrong and his behavior needs to be corrected – in his own home!

A contents pro would say something like, “Mr. Johnson, the men would like to move your antique chest of drawers down the hall. Is this an appropriate time?” If the owner is standing in that very hall, it alerts him to the fact that he is in the way, without actually stating it.

It all boils down to being courteous, supportive, respectful and understanding. The owner may still get angry that some things are not covered under his policy. He may insist that there are scratches on his hardwood floor that weren’t there before, but we have found that when a tone of reasonableness has already been established, the odds are increased that the owner will tend to reflect that attitude.

You may have noticed that when the contents specialists are cleaning the soot off ceilings and walls, they start at the top and work their way down (no sense in cleaning the same area twice by working their way from the bottom up – only to find that various particulates have trickled down over an area they thought they had finished).

Actually, that same strategy is used for virtually all the surfaces in the home. And it is often performed in a “circular” pattern – from top to bottom and around the room. Ceilings, walls, doors and door frames, light switches, windows, etc.

Of course that pattern is interrupted when there are items that need to be packed out. In fact with a typical case, the packout will take place before the cleaning protocol is engaged.

Sometimes the furniture and other valuables will be left in place in order for the deodorizing procedures to neutralize odors in them as well. The whole intent is to create an assembly line of restoring, so that no one activity stops the team from continuing – forcing them to wait for one phase of the job to be completed.

So the fire is out, but the soot, VOCs and other noxious compounds are swirling around like something out of a Harry Potter movie. The contents pros know that if they clean anything (couch, bedding, kitchen counters) it will be coated again in minutes. And permeated with odors that cannot be removed in that environment.

The structural team is insisting that the furniture should be removed from the home because they can’t complete the job with all those valued items in the way.

The contents pros have techniques for cleaning items in place and air scrubbers that can assist with clearing the air, but they are honor bound to restore items and keep the project within budget. Under these circumstances, they will move many items out of the house and will use widely varying methods to reduce the malodors inside. Then they will decide which things need to be taken to their restoration building for proper cleaning and deodorizing. A full “packout” is not necessarily their first choice, but when it is called for, they have the trained staff, the cleaning solutions and the technology to restore not replace.

Learn more about Contents Solutions in this guide: